These kids draw a crowd. A combined 3,000 people cheered on 160 creative problem solving teams at New Hampshire Destination Imagination regional tournaments Saturday in Goffstown and North Sutton. The top performing teams will advance to NH-DI State Finals in Nashua on April 2 in hopes of representing New Hampshire and compete with teams from 48 states and 15 countries at Destination Imagination Global Finals in May.

“We’ve had an amazing day at Goffstown High School and Kearsarge Middle School, according to the non-profit’s executive director Anna Maenhout. “160 teams from around the state participated in our second week of Destination Imagination regional tournaments. Many thanks to our over 400 volunteers who made this day happen!”
Students participated in STEAM-based challenges that develop lifelong skills in creativity, project management, collaboration and problem-solving skills. Team Challenges are focused in technology, science, fine arts, improvisation, structure or service learning. Unlike many programs, the students teams of up to seven students are responsible for solving all aspects of the challenge, from planning and time schedule to idea generation and construction.
In most areas, Destination Imagination is a program run after school by schools and community groups. 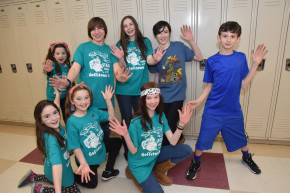