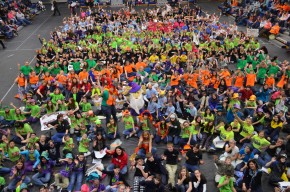 More information, including the preliminary schedule, will be posted when available.

I’m sure everyone would agree that we wouldn’t want anyone to miss a performance because they were unable to find a parking space near the school. The parking lots at Winnacunnet have enough spaces to accommodate several hundred vehicles, but we don’t want to run out of room.

Please try to carpool if possible. If your team plans to bring more than two or three cars, it would be very helpful if you didn’t park all of your vehicles in the school parking lots. There is quite a bit of parking available nearby, so you might want to find a space that’s close to the school, and either walk to Winnacunnet or shuttle people using your other cars. If everyone does this, we shouldn’t run out of parking spaces.

I’m sure many of you will be driving east to Hampton on NH Route 101. If so, your GPS will probably send you over the Route 101 bridge that crosses US Route 1 in Hampton.

This bridge will be closed for the next two months. Eastbound traffic will be directed onto the US Route 1 southbound off-ramp, and then back onto Route 101 via US Route 1 northbound.

Please don’t worry if this happens, because Winnacunnet is only a short drive away, via either US Route 1 northbound OR Route 101 eastbound. You were probably planning to drive to Winnacunnet on one of these two roads anyway!

If you want to avoid the construction area entirely, you could get off NH Route 101 about 2 miles earlier at exit 13 (NH-27/Hampton), and take NH-27 East (Exeter Road) to the center of Hampton.

The Solar Stage and Hold It!

I’ve been asked how dark the room will be for The Solar Stage. We checked this last night, and it will be as dark as a theater.

Congratulations to the New Hampshire teams that have advanced to the State Tournament! We know you’ll be working hard to make your Team Challenge solution even better than the one you presented at your regional tournament, so we’re really looking forward to seeing what you have in store for us!

After the North Sutton Regional, I asked the Team Managers of the advancing teams whether they had any idea that they’d be attending the Going to States meeting at the end of the tournament. About a third of the hands went up, which was just what I thought would happen. That’s one of the things that I love about Destination ImagiNation—given the opportunity, our kids often surprise us by accomplishing a lot more than adults would ever expect!

Many DI team members also participate in other activities, such as band, dance, and theater. Sometimes this leads to schedule conflicts. I’m writing this on the morning after the first regional tournaments, and I’ve already heard from teams with members who have another important commitment on March 31.

Email me right away at craig.richardson@nh-di.org if this is a problem for your team. I’ll do my best to schedule your Team Challenge and Instant Challenge when all of the team members can participate. That might not be possible if you wait until after the preliminary schedule is published, so please ask all of your families about this ASAP.

Include your team number in the email to make sure I have the right team. I’ll also need to know the reason for the request, and the earliest (or latest) time when your team member(s) can be at the tournament. I usually receive many requests, so please be specific, and don’t just ask for an early (or late) performance. It’s better for me to know that you have a team member who must leave by 2:00 PM.

Finally, I’ve been asked about possible use of dry ice at Winnacunnet. I have asked the facilities staff about this, and dry ice will NOT be allowed in the building.