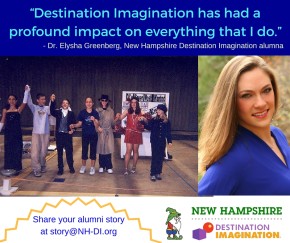 Elysha Greenberg began her long journey with Destination  Imagination, or “DI”, in 3rd grade, continuing her involvement all the  way throughout her high school career and into post-undergraduate Doctoral studies. As of 2016, her 19 years of  participation with DI is not only impressive, but also serves as  living proof of the lasting impact of DI’s mission.

After years of experience with DI throughout her adolescence,  Elysha graduated from Salem High School and began to  volunteer her time at DI meets and events, often coordinating  instant challenge prep programs. DI soon presented an avenue  through which Elysha could educate participants about the  dangers and hazards of smoking. She parlayed this public  service goal into the development of a tobacco education  Instant Challenge, which she was later able to present at  Regional and State competitions as a way for teams to practice Instant Challenge skills while learning about the dangers of smoking in a  hands on environment.

NH Destination Imagination Alumni:
Share your story with us at story /a t / nh-di.org

Today, Elysha has earned her Doctoral Degree from William  James College. It will come as no surprise that she has found a  way to incorporate her enthusiasm about DI into her Doctoral  research as she explores the ways in which programs like DI  impact and promote mental health and well-being for  adolescents at large.

Elysha coordinated with local DI Team Managers to assemble a  list of 10 research participants. Once children and their  guardians agreed to participate, Elysha spent countless hours  driving around New England to the family homes of her  interviewees with the intention of giving children a voice in  expressing their formative experiences with DI.

Though much of her research hinges on themes of adolescent  creativity and social awareness, some of her other key findings  illuminated which areas of adolescent life were most positively  affected by involvement with DI, like the building of  friendships, coping skills and perseverance. Not only does her  research demonstrate this, but her own experience attests to  its validity as well.

Destination Imagination helped her to “generate a greater  sense of community, creativity and confidence.”

Personally, she notes that Destination Imagination helped her to “generate a greater  sense of community, creativity and confidence,” which in turn  had a significant impact on how she connects with those  around her. She continues on to say that the organization  helped her “develop relationships with other students, and  deepen those friendships over the years, connecting with  professionals in the community,” people who she claims have  since had an influential impact on her professional life. Even  now, she considers DI an integral part of her continually  broadening social and professional network.

She believes that DI and organizations similar to it should be  integrated within every school system, and every child’s life.  Elysha categorizes organizations like DI as vehicles through  which we as a society “can promote healthy childhood  development, 21st century learning skills and positive  community building.” 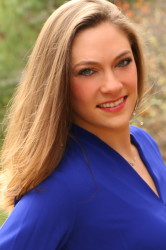 Dr. Elysha Greenberg was born and raised in Windham, New Hampshire. She attended Golden Brook Elementary , Center School, then Windham Middle School, and moved on to Salem High School. She earned her undergraduate degree from Brandeis University in Waltham, MA, where she majored in Psychology and minored in Hispanic Studies. Her education continued at Boston College, where she earned her Masters Degree in Mental Health Counseling. She has now graduated from William James College, formerly known as the Massachusetts School of Professional Psychology, with her doctorate in Clinical Psychology. Dr. Greenberg has now entered a post-doctoral fellowship program where she works with children, teens, and families. Upon completion of her post-doc next year, she will pursue licensure as a clinical psychologist.