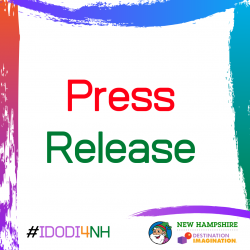 Over three weeks, over 1,000 New Hampshire students will compete with Future of Work skills at Destination Imagination Regional Tournament, starting this Saturday in Meredith.

Collaboration, problem-solving, creativity, collaboration and critical thinking are among the most sought-after skills in business. These teams will compete over the next three weeks in those very skills, solving challenges based in STEAM: Science, Technology, Engineering, the Arts, and Math, as well as social entrepreneurship. Competitions start this weekend at Inter-Lakes High School in Meredith.

WHO: Students K-12th grade from 25 area New Hampshire schools and community groups. Teams of up to 7 students will compete within their chosen Challenge and age level.

WHAT: Destination Imagination Regional Tournaments. Team Challenges are often very visual and are focused in: Technical, Scientific, Engineering, Fine Arts, Improvisational, and Service Learning and Entrepreneurship. There is also a non-competitive Early Learning Challenge that allows participants to develop social and problem-solving skills.

Top-finishing teams advance to the State Finals on Saturday, March 28th in Nashua, and teams from “States” can qualify to attend Destination Imagination Global Finals to compete with the best teams from 15 countries and nearly every state.

WHERE/WHEN: THIS weekend at Meredith:

The following organizations are competing at this weekend’s tournaments:

Teams start in the fall, compete in March to try and advance to Destination Imagination Global Finals in May. Each year, over 1,000 people volunteer to help us run DI in New Hampshire. Many of these volunteers are among our 120,000 New Hampshire alumni – those who have been on teams when they were in school.

NHICC also runs one of the oldest STEAM summer camps in the nation, Camp Gottalikachallenge (nh-di.org/camp). We also elp run one of the newest, Girls Engineering the Future (nhicc.org), in a partnership with Destination Imagination, FIRST and the University of New Hampshire.