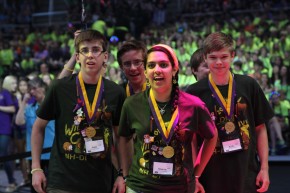 It was an amazing week to be among the 1,468 teams from 17 countries and 47 states that took part in Destination Imagination Global Finals. Buzz Aldrin, Paula Abdul, Dr. Bill Dorfman, imagineers and illustrators from Disney were all there, as were numerous actors, voice over artists and choreographers from Broadway. This was a Global Finals to remember. We’re all proud of Hollis-Brookline, not only reaching top Instant Challenge Score but First Place in the World.

Other amazing top finishes include: