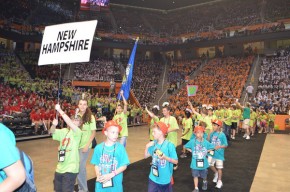 These are the teams that will be representing New Hampshire at Destination Imagination Global Finals from May 22-25, 2013 at the University of Tennessee in Knoxville.

As in regional and state competitions, teams will compete within their Challenge and age group.

Teams will compete with teams from virtually every state and Canadian province, as well with over 1,000 teams from at least 12 other countries including China, Korea, the U.K., Poland, Brazil, Mexico and Argentina.

LINKS LEAD TO THEIR PHOTOS for media, family and friends!