They’ve competed at events through New Hampshire. Friday, the 41 student creative problem-solving teams that will represent New Hampshire with 1,400 teams from 48 states and 15 countries at Destination Imagination Global Finals later in the month will meet for their first time this Friday night in Londonderry. They will officially become Team New Hampshire.

In the fall, over 300 New Hampshire teams took part in Destination Imagination STEAM-based Challenges appraised on the team’s creativity, problem-solving, situational management and innovation skills.  Friday night, the top teams who survived several rounds of competition will be briefed, along with the Team Managers and parents what to expect at the world’s largest event of its kind, Destination Imagination Global Finals (GlobalFinals.org) to be held at the University of Tennessee in Knoxville. 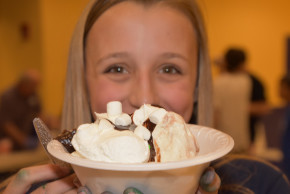 3M, Disney, IBM, Oracle Academy, NASA and National Geographic are just some of the companies extending the educational event beyond the competition at the Innovation Expo.

Did I mention we call this our “Spoil Your Dinner” event?