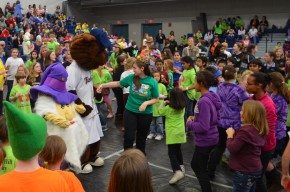 Award photos and results, including special awards are available on the State Tournament Page. We have added the Team NH Photos (teams advancing to Global Finals) and are still adding MANY more photos!

Saturday at Winnicunnet High School in Hampton, New Hampshire Destination ImagiNation held its State Finals competition where qualifying teams competed in judged challenges that incorporated core school subjects with a focus that is technical, scientific, arts-based, improvisational, structural or social-learning. These teams had advanced through competition around New Hampshire earlier in the month. What makes DI unique is that all solutions, including all ideas and construction must be done SOLEY by the team members, and not adults or friends.

These teams, now dubbed “Team New Hampshire”, range in elementary, middle and high school levels and will compete at “Globals” with 1,200 teams from virtually every state and Canadian province as well as over 13 other countries.