Why We (Still) Gnome 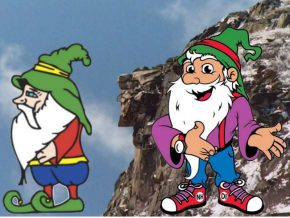 For over 110,000 students that have been on teams, we are New Hampshire Destination Imagination. For the majority of our 33 years, we have been known by our mascot, the Gnome. But why? Sit down, and I’ll tell you the story.

Originally drawn in 1987 by a girl (who is now a Team Manager), the Gnome stood for the magic of what is possible, but in a human form reminiscent of the iconic Old Man of the Mountain. Also known as “The Profile” or “The Great Stone Face”, it came crashing down on May 3, 2003. To this day, the Old Man is on our road signs and license plates – and at NH-DI.

Over the years, our team members always saw the Gnome at NH-DI events and all of our program events. He literally became the visual representation that they remembered as kids when they were on our creative problem-solving teams. And for many, it helped bring them back as some of the adult volunteers on our board and tournaments.

He’s been invited to skiing at Mascot Day at Pat’s Peak, has been to Fungo’s birthday parties with the New Hampshire Fisher Cats, and numerous parades around the state. He even appeared in this video with Fungo: What happens when two mascots and a human get on an elevator.

In 2016, we took another look at the Gnome. A hard look. Team members, volunteers, and especially our alumni were very vocal in not only keeping him, but modernizing the iconic logo. Hundreds of people were part of the redesign. At several of the tournaments, hundreds of team members broke out in chants of “Gnome, Gnome, Gnome!”

And that’s why we continue to use our Gnome: Because he is the visual representation of our team members learning to collaborate and build creativity, confidence and problem-solving skills. And then, helping to bring them back to volunteer to help the next generation of innovators. 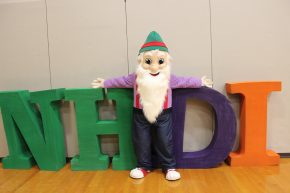